Tashi Tenzing is an explorer, an entrepreneur and a philanthropist. Living in Kathmandu, Nepal with his wife Bandi Nima Sherpa , he has followed in the footsteps of his grandfather 3 times Everest Summiteer, Tenzing Norgay Sherpa, who with Sir Edmund Hillary made the first ascent of Everest on 29 May 1953. Tashi's mother Pem Pem (Tenzing Norgay's eldest daughter), also an internationally respected climber.

th Anniversary Everest Expedition to mark the first successful expedition of his grandfather. Today he and his wife Bandi Nima Sherpa run a private adventure company Tenzing Asian Holidays & Tashi Tenzing Private Journeys to the Himalaya, Antarctica, Arctic, Burma and Africa. They are the Founders of the Nepal Green Tara Foundation, which helps change the lives of underprivileged children and the low caste of Nepal.

An exceptional story teller who appeals to a broad audience, Tashi is an outstanding motivational speaker and a highly successful fundraiser. His motivational lecture has taken him to all the corners of the world.

Tashi Tenzing spent his childhood in Darjeeling, the famed British hill station and tea growing area. He attended St Paul's School - a private boarding school in the strict British tradition, where he made a name for himself in outdoor education, excelling at distance and sprint running, soccer, cricket, gymnastics, karate, hockey and horse-riding as well as in more artistic pursuits such as oil painting and batik.

Tashi then went on to the University of New Delhi to gain a Bachelor of Arts degree in Sociology, but his first love has always been the outdoors and, especially climbing. He established the Delhi University Climbing Club and excelled at all the climbing and outdoor adventure courses at the Himalayan Mountaineering Institute in Darjeeling, which had been established by his grandfather. Tashi graduated from HMI as an instructor and continues to take courses there as a guest Instructor. 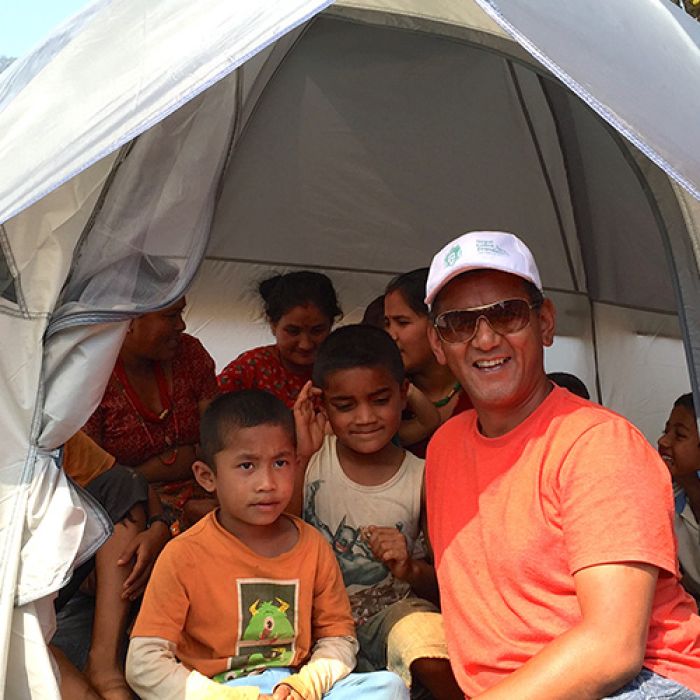 This email address is being protected from spambots. You need JavaScript enabled to view it.

Since leaving University, Tashi has been almost solely employed in leading trekking and climbing trips in the Nepal, Tibet, Pakistan, Kashmir, and Indian Himalaya. He has trekked widely in Nepal, especially the Everest area, in Kashmir and Ladakh and in the eastern Himalaya of Bhutan and Sikkim.

In 1993 Tashi led the 40th Anniversary Everest Expedition to mark the 40th anniversary of the first successful expedition of his grandfather, Tenzing Norgay Sherpa. His team was successful, getting two members to the summit on May 10th. Sadly, Tashi's uncle and climbing partner, Lobsang Tshering, fell to his death on the descent from the summit. Tashi missed the summit by just 400m having to turn back with snow blindness.

However, on May 23 1997, Tashi reached the summit of Everest, an achievement he repeated on May 16, 2002 with the Swiss Rolex 50th Anniversary team, and on May 16 2007, this time from the Tibetan side - the North Face - guiding the first Czech Republic women to the top. He summited Mount Cho Oyu 6 highest mountain in the world 2006 and the highest mountain in North America Mount Denali July 4 2017.

In August 2001 Tashi and his former wife Judy published their first book - Tenzing and the Sherpas of Everest - which pays tribute to the immense contribution the Sherpas, including his grandfather Tenzing, have made to Himalayan exploration and mountaineering. The book is published worldwide.

Over many years, Tashi has spent time working as an explorer and researcher for the Australian Antarctic Division at Mawson Station in the Antarctic. He has guided numerous adventure groups in this icy wilderness as well as alpine ascents on climbing trips for Aurora Expeditions. He has completed five successful crossings of South Georgia. In 2002/3 Tashi worked on the filming of Warner Bro's Happy Feet, spending a month in Scott Base and two months in the Antarctica Peninsula.

As founders the Nepal Green Tara Foundation, Tashi and his wife Nima have built five schools and a health clinic to change the lives of the low caste children of Nepal, as well as worked to save the environment.

Tashi has been appointed a Goodwill Ambassador for Rolex, Multiplex & Brookfield Developers (UK, Europe and Australia), Amari Hotels - Bangkok , Thailand and Toyota -Nepal. He was awarded the National Citizen's Award by the President of India at New Delhi/India, for summiting Mt. Everest on 7th Feb 1998. The Nepal Minister appointed Tashi, for Tourism and Civil Aviation, as the Australian Goodwill brand ambassador for Nepal from 2015 to 2017.
Learn to Surf with Us

How You Can Help

This work would not be possible without you. Your ongoing support makes an enormous difference in the communities where we work and the lives of those living in the Nepal Green Tara Foundation.
Donate Now
GET INVOLVED